The McCleerys: A Family Built Through Connection and Compassion 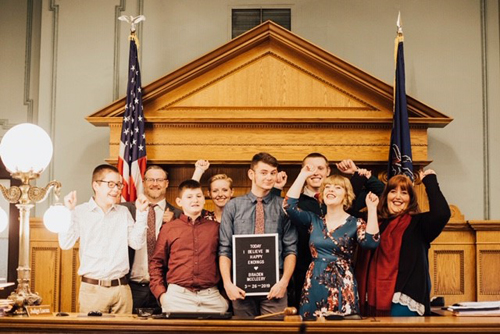 Adoption had been on the minds and hearts of Katie and Tobias McCleery for a long time. After the birth of their third child, they knew their family still had room to grow and that adoption would be their path forward. In 2012, the McCleerys became foster parents through Bethany Christian Services and welcomed their son Tyler into the family shortly after.

Despite the training they received, the McCleerys quickly realized that they needed to come at parenting from a different perspective than they had used with their biological children. They were now the parents of a child who had experienced trauma and their “toolbox of parenting tools was ineffective for parenting a hurt little boy.”  Katie and Tobias were now parenting a child with new behaviors that were unlike a typical six-year-old. They realized that every behavior had a root cause and when the cause was addressed, the behaviors went away. Although challenging at times, the McCleerys found great joy in becoming Tyler’s family.

The McCleery family’s adoption story continued when Bethany Christian Services contacted them once again in late 2013 to provide weekend respite for a brother and sister who were struggling in their foster home. The siblings developed a relationship with the McCleery family. As the case moved towards adoption, it was decided that the children would be placed in separate homes, and Ozzie was going to become a permanent part of their family. Ozzie officially moved in with the McCleerys in January 2014 and was adopted in November 2014. Although Ozzie and his sister were adopted separately, their families understood the importance of maintaining their sibling connection. They were adopted on the same day and both families ensure that the children spend time together at least monthly.

The importance of maintaining sibling relationships did not stop with Ozzie and his sister. One of Katie’s main goals for Tyler was to track down all five of his siblings for a reunion – and she did just that!  Although the siblings were placed in different locations, and all had been adopted but one, Katie was able to locate the families of each of Tyler’s siblings and invited them to her home for a reunion.  While Katie’s main goal was to keep Tyler connected to his siblings, this visit led to something much greater.

Katie and Tobias were contacted by a Kinship Navigator from A Second Chance assigned to the case of Tyler’s brother Braden. The McCleerys had no intention of adopting another child, especially a 17-year-old boy, but after spending more time with Braden, taking the process slowly, and building a level of comfort, the McCleerys knew it “just felt right.”  Braden joined the family in August 2018 and was officially adopted in March 2019. Although Katie and Tobias have always made sibling relationships a priority, they have found just how rewarding it is for Tyler and Braden to maintain their biological connection and experiences together in one home. The boys learned how to have a healthy sibling relationship where neither feels the need to fulfill a parenting role for the other.

Katie and Tobias McCleery received the Permanent Family Recognition award at the 2019 Pennsylvania Permanency Conference. Raquel Tridico, their caseworker at A Second Chance, nominated them, saying “[they] have exemplified the compassion and grace needed for successful permanency.” Katie and Tobias consider themselves to be a “normal family.” They want others to know that they “don’t have to be something special or a superhero” to become an adoptive parent. They rely on their sense of humor, faith and support system to help them be successful.

The McCleery’s biological children – Grace, Molly and Rusty – have also grown through the process. They are more compassionate because of their experiences with adoption and have learned that everyone has a story. They each have found fulfillment in the experiences and plan to consider adoption when they are ready to create their own families.

Katie stated that “there is nothing special or unique that makes it work,” and the McCleerys genuinely want others to consider the idea of becoming a foster or adoptive parent. According to Katie, “there are more people who could walk the walk than they think.”

Lindsey Snow is a SWAN regional technical assistant based in western Pennsylvania. Prior to joining the SWAN prime contractor, Lindsey worked directly with foster and adoptive families as a caseworker with a SWAN affiliate agency. She loves to hear success stories like the McCleery’s because she feels humbled by the love, dedication and perseverance of adoptive families.  Although the McCleery’s consider themselves to be a “normal” family, Lindsey was honored to interview them for this article and considers them to be “superheroes.”